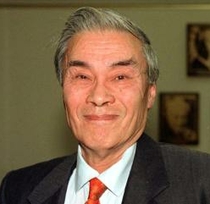 Actor. Born Herbert Tsangtse Kwouk in Warrington whilst his parents were visiting the UK, was brought up in Shanghai, moving to Hong Kong after the Chinese revolution. Arriving in Britain in 1949, he tried a variety of jobs before turning to acting. An early film appearance was in 'The Inn of the Sixth Happiness', and he subsequently portrayed a variety of Eastern nationals, in James Bond movies and most famously Cato the manservant of Peter Sellers' Inspector Clousseau in the Pink Panther films.

On television he played various villains, and was the Japanese camp commandant in the 'Tenko' series. By a strange twist of fate, he returned to his northern roots playing one of the regulars in 'Last of the Summer Wine'. Died in the Marie Curie Hospice in Hampstead.

This section lists the memorials where the subject on this page is commemorated:
Burt Kwouk

Inventor and designer of engines. Born Kensington.  He worked with Sebastian ...

Our 1960 picture comes from Warsaw1948 which has a wonderful collection of ol...