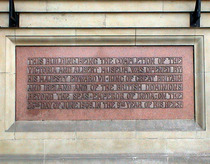 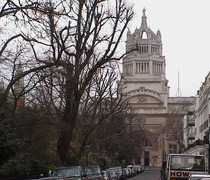 This building, being the completion of the Victoria and Albert Museum, was opened by His Majesty Edward VII, King of Great Britain and Ireland and of the British Dominions beyond the seas, Emperor of India, on the 26th day of June 1909,in the 9th year of his reign.

This section lists the subjects commemorated on the memorial on this page:
V&A façade foundation stone, Edward

This section lists the subjects who helped to create/erect the memorial on this page:
V&A façade foundation stone, Edward

This section lists the other memorials at the same location as the memorial on this page:
V&A façade foundation stone, Edward