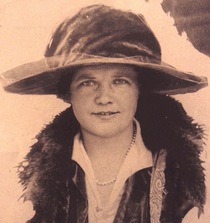 The Women's Social and Political Union, secretary of Newport branch, founder of Time and Tide and the Six Point Group. Institute of Directors' first female president in 1926.

Born as Margaret Haig Thomas in London but raised in Wales. 1908 married local Newport landowner Sir Humphrey Mackworth. 1915 she was on the RMS Lusitania when it was sunk by enemy action. She was rescued but took months to recover from the hypothermia. Died London.

Because her father had arranged it when he accepted the title Viscount, the title passed to Margaret (2nd Viscountess Rhondda) on his death in 1918, but she was not allowed to sit in the House of Lords.

This section lists the memorials where the subject on this page is commemorated:
Margaret Haig Thomas, Viscountess Rhondda

Feminist and pacifist. NUWSS, editor of Common Cause, internationalist, pacif...