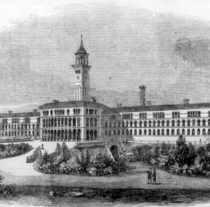 There are several different names which all apply to the same institution. The Central London School District was formed in 1849, when the school district's board acquired a privately owned building in Norwood, which was used as a pauper school. In 1854 it was decided to transfer to this site in Hanwell, and the first pupils were admitted here at the end of 1856. A total of 1,200 children could be accommodated on the site. It was also known as the Cuckoo Schools, after the name of the farm on which it was built. It was partly destroyed by bomb damage during WW2, and in 1945, the remaining buildings became the Hanwell Community Centre.
Charlie Chaplin and his half-brother Sydney were one-time pupils.

This section lists the memorials where the subject on this page is commemorated:
Central London District Schools

This section lists the memorials created by the subject on this page:
Central London District Schools

The (non-working) water fountain is located in a small garden next to the Han...

The Queen's college site is a lively site and provides some history. Catherin...