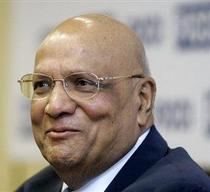 Business magnate, philanthropist and politician. Born Swraj Paul at Jalandhar, Punjab, India. He moved to England in 1966 to get treatment for his daughter who was suffering from leukaemia. Founded the Caparo Group in 1968. Created a life peer in 1996, he became the first Indian deputy speaker of the House of Lords. He has supported many charitable causes, through the Ambika Paul Foundation. In 2009, he admitted to the fraudulent claiming of expenses, but was not prosecuted. Has lived in Portland Place since the 60s.

This section lists the memorials where the subject on this page is commemorated:
Lord Paul

Established the first antique shop on Portobello Road according to the plaque...

Chairman and managing director of the Brilliant Sign Company. He purchased th...

Shoemaker and trade unionist. Born in Roborough, South Devon. His year of bir...