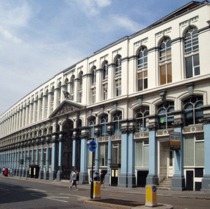 Hops were introduced to England from the Netherlands. They were grown principally in Kent and brought to London via the River Thames and later by rail to London Bridge. By the mid-nineteenth century, all but two of the major hop merchants or 'factors' in London, were located in the Borough area. The photograph is of the former London Hop Exchange in Southwark Street. It opened in 1868 with the intention that merchants would set up their stalls so that brewers could sample the different varieties, but the scheme failed. A large proportion of the hop warehouses was destroyed in the blitz and the centre of the hop trade moved to Paddock Wood in Kent.

This section lists the memorials where the subject on this page is commemorated:
London Hop Trade

Credit to Researching the Past for the splendid research on the names on this...