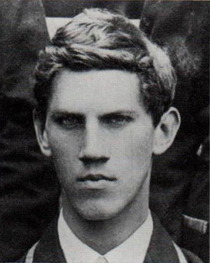 We really don't know if the Sebastian Earl who unveiled the stone at the Hornsey YMCA is the rowing businessman with the same name but the dates look right and it's an unusual name. Our colleague, Alan Patient, spotted the possibility and it seems likely - hope we are right.

Born Kent. Head of School at Eton, won a scholarship to Magdalen College Oxford, rowed four times in the Boat Race and won a rowing silver medal at the 1920 Antwerp Olympics. Held a variety of commercial posts and then in 1932, joined the John Lewis Partnership where he rapidly gained experience in many senior roles. In 1941 he was appointed Director of Selling and in 1946 Director of Expansion. He resigned in 1947 for ill health but then began work at Selfridges from which he retired in 1965. Died Winchester. We have taken his dates from Wikipedia; elsewhere his death date is given as 14 August.

This section lists the memorials created by the subject on this page:
Sebastian Earl

This stone was laid by Sebastian Earl to commemorate the extension of Hornsey...

Erected at the entrance to the Bishop of London's Park.