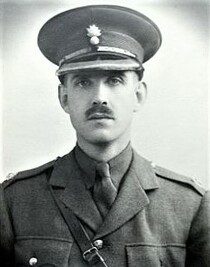 Nicholas James Redvers John Townshend Durham was born on 13 January 1905 the son of James Andrew Cunningham Durham FSA (1879-1954) and Lady Agnes Elizabeth Audrey Durham née Townshend (1870-1955). His birth was registered in the 1st quarter of 1905 in the Paddington registration district. On 15 February 1905 he was baptised in the District Church of St John, Great Marlborough Street, Westminster, where the baptismal register shows his family residing at 4 Norfolk Square, Paddington.

He married Joyce Wynyard du Pré (1912-1989), the marriage being registered in the 2nd quarter of 1934 in the Amersham registration district, Buckinghamshire.

Electoral registers for 1938 & 1939 show him and his wife listed at 16 Raphael Street, London, SW7, whereas in the 1939 England and Wales Register he and his wife were recorded as one of the eighteen people in Wilton Park House, Beaconsfield, Buckinghamshire, the home of his wife's parents, Lt. Col. William Baring Du Pré (1875-1946) and Youri Wynyard Du Pré née Wright (1880-1942). His occupation was recorded as a stockbroker whilst his wife was shown as a member of the British Red Cross Society, Nursing Mobile Section.

As a Second Lieutenant in the Army Officers Emergency Reserve he joined the Grenadier Guards, regimental number 147327, on 10 September 1940 and proceeded overseas on 15 June 1942 in their 6th Battalion. It set sail from Liverpool to Syria where they became part of 201st Guards Brigade. They had to guard the border and protect the oil pipelines at Kirkuk. In March 1943 the battalion moved to North Africa to join 8th Army under General Montgomery and trained as "Motorised Infantry" in desert warfare.

Promoted to a War Substantive Lieutenant, he died, aged 38 years, on 17 March 1943 in the Battle of Mareth in Tunisia and as he has no known grave he is commemorated on Face 11 of the Medjez-el-Bab Memorial in the Medjez-el-Bab War Cemetery, Béja, Tunisia . He is also shown in the Commonwealth War Graves Commission's website.

Probate records show that his address had been 40 Chesterfield House, South Audley Street, London, and that when probate was granted on 19 May 1945 to Michael Henry Beaumont Eddowes, a solicitor, his effects totalled £2,828-15s-0d.

This section lists the memorials where the subject on this page is commemorated:
Lieutenant Nicholas James Redvers John Townshend Durham

Ghana is in West Africa.  Colonised and gained independence in 1957, the firs...

Anglican archbishop assassinated during the rule of Idi Amin, in Uganda.

Charles John Klyberg was born on 29 July 1931, the son of Charles Augustine K...