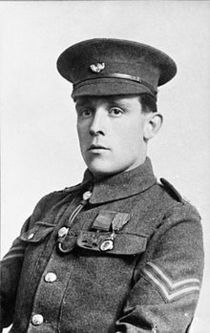 Born 23 Abbey Street. Served in the Army for seven years from 1907. Two weeks after ending his service in summer 1914, he was called up again to fight in WW1. On 26 August 1914 he dodged German shells to rescue an injured soldier and then prevented a British gun from falling into enemy hands. This act of bravery brought him the VC.

In LondonSE1 a member of the family is quoted as saying "When he came back from the war he and his wife had six children in quite quick succession. They were very very poor and he couldn't find work and they were facing going into the workhouse. He sold his Victoria Cross to prevent them going into the workhouse. His Victoria Cross is now with a private collector but the family in Australia have got the replica he had made."

Died Australia. Note: LondonSE1 gives his birth year as 1891 but Wikipedia gives it as 1889.

This section lists the memorials where the subject on this page is commemorated:
Lance Corporal Frederick Holmes

{Below an image of a Victoria Cross medal:} Lance Corporal Frederick Holmes, ...