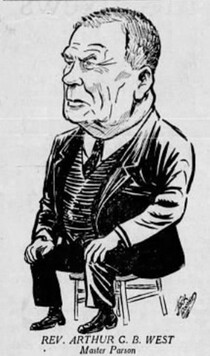 We were delighted to find this Jack Boothe drawing of West in The Vancouver Province (British Columbia, Canada), 21 September 1935. The article, 'Big man with big hands comes out to start fifty boys and girls at farming', has a splendid description of him written by Cecil Scott.

“… about sixty. He had the shoulders of an ox, the neck of a bulldog, the fist of a navvy … His eyes were grey, and almost inscrutable while he looked you over. His heavy face, creased with wrinkles, was expressionless while he took your measure. Then he smiled; wrinkles broke the corners of his eyes, and you knew that you were all right. This man who could so easily look like a thug liked you. Indeed, apparently he liked everybody and was sociable by nature."

Rector and ‘Master Parson’ of St. Dunstan-in-the East, MA of Oxford and Adelaide, contributor to journals such as “The Edinburgh”, “The Nineteenth Century”. Played cricket and rowed.

He had taken 50 children, aged 8-12, from ‘depressed areas’ of Britain to British Columbia to learn farming at the Prince of Wales Fairbridge Farm School near Duncan, Vancouver Island. “… in the course of his varied career …” West had already spent 12 years in Australia where Fairbridge Farm Schools had been operating for many years. The children were considered migrants and would be found jobs after training. The Child Migration Trust gives the modern take on this practice.

He had to be back at St Dunstans by 25 October to participate in “the annual Fish Festival, where Billingsgate merchants decorate his church with thirty-nine varieties of fish that are fed during the succeeding two days to the patients of Guy’s Hospital.” We can find no other reference to this smelly festival so perhaps it ended when St Dunstans was destroyed in WW2.

Elsewhere we learnt that West seems to have had a special interest in the City Churches after the war. Author of 'Friends of the City Churches' published 1947 and 'Report Of Bishop's Commission On City Churches - an Original Article From The Quarterly Review, 1945. The story of the rehanging of the bells of St Dunstans (1276 – The Ringing World December 16/ 23, 2011) contains references to West's involvement. Some dates there suggest that West died 1951/2, but we can't find an obit.

We published this subject in May 2021 and subsequently our colleague, Andrew Behan, has researched West including finding his dates of birth and death and photographic image of him held at the National Portrait Gallery.

The Reverend Arthur George Bainbridge West was born on 28 July 1864 in Dunholme, Lincolnshire. The 1871 census shows him living at Dunholme Lodge, Dunholme, with his parents John and Mary West. His father was described as a farmer with 920 acres employing 20 men and 10 boys. Also living there were his two brothers, four sisters, a governess, two nurses, a cook, a nursemaid, three male farm servants and a groom.

He attended Tonbridge School, High Street, Tonbridge, Kent and the 1881 census shows him as boarding scholar living in Judde House, 10 London Road, Tonbridge. He went on to New College, Oxford in October 1883 obtaining his Bachelor of Arts in 1888. The 1891 census shows him living at Dunholme Lodge Farm with his widowed step-mother Margaret West, a brother, a sister, a cook, a housemaid and an under housemaid.

He served as a curate at St Mary's Church, South Shields, Durham 1891-1894 and at St Paul's Church, West Hartlepool, Durham 1894-1896, before leaving for Australia where he was initially at Glen Osmond, Unley, South Australia 1896-1897 before being appointed as rector of St Augustine's Church, Unley from 1897 to 1905. On 13 April 1898 he married Annie Elise Florence Edwards (1867-1925) in Adelaide Cathedral, South Australia and they had eleven children. He was the incumbent of St Thomas's Church, Essendon, Victoria, Australia from 1905 until 1908 when he returned to England and was appointed as the rector of St Dunstan-in-the-East, Idol Lane, London EC3.

In the 1911 census he is shown as a clergyman living at 24 Granville Park, Lewisham, with one son, four daughters, a cook and a housemaid. His wife had for some weeks been a patient at Bethlem Royal Hospital, St George's Fields, Southwark, but upon her discharge he refused to allow her home causing her to live at The Wilkie Hotel, St Stephens Road, Paddington. On 16 May 1911 she petitioned the High Court of Justice for restitution of her conjugal rights. The case was eventually dismissed on 19 January 1912 as both parties had resumed cohabitation. However, he had to pay his wife's solicitors their costs of £11-6s-6d.

Kellys 1922 Local Directory shows him living 16 St James's Avenue, Beckenham, Kent, and telephone directories from 1928 to 1938 list him at Oldbury Manor, Ightham, Borough Green, Kent. The 1938 edition of Kelly's Local Directory confirms him residing at Oldbury Manor House in Ightham, Kent and describes him as 'master parson & custodian of archives of St Dunstan-in-the-East, Idol Lane, London'. In the 1939 England and Wales Register he is shown as a clerk in holy orders living at the Old Mill House, Shorne, Gravesend, Kent, who was also an ARP Warden in the City of London. Also residing in the house was Gretrude Redfern-Loades (1886-1971) a widowed housekeeper.

Probate records confirm that he died at The Old Mill House, Shorne, aged 87 years, on 29 January 1952 and when on 26 May 1952 probate was jointly granted to Barclays Bank Limited and Gertrude Redfern Loades, his effects totalled £8,731-2s-6d.

This section lists the memorials created by the subject on this page:
Arthur G. B. West

This plaque was planned during turbulent times in the royal-watching communit...

In the south-east corner of Cornhill and Gracechurch Street.  A medieval chur...

Originally founded as a mission in 1842, it was built to serve the local Cath...