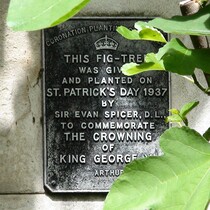 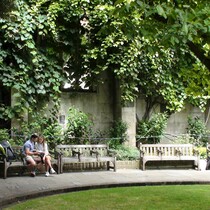 Coronation Planting Committee
This fig-tree was given and planted on St. Patrick's Day 1937 by Sir Evan Spicer, DL, to commemorate the crowning of King George VI.
Arthur G. B. West - Rector

One wonders how the St Dunstans plaque erectors felt when they heard the news on 10 December, with the fig tree on order for 17 March, and a plaque commemorating the coronation of King Edward VIII all ready to go. See the plaque at the City of London School for a plaque committee with an even worse tale of woe to tell.

These three plaques are on the south side of the south wall of the ruined church. Our photo shows all three plaques, left to right: fig tree; Gyle-Thomson; garden.

This section lists the subjects commemorated on the memorial on this page:
Coronation of George VI - fig tree

This section lists the subjects who helped to create/erect the memorial on this page:
Coronation of George VI - fig tree

We were delighted to find this Jack Boothe drawing of West in The Vancouver P...

This section lists the other memorials at the same location as the memorial on this page:
Coronation of George VI - fig tree

The plaque spells Thomson without a 'p' and, given the Hugh Gyle-Thompson tha...

It's not possible to read all the text but the 1345 date confirms that our (n...

Near this spot Punch's Puppet Show was first performed in England and witness...