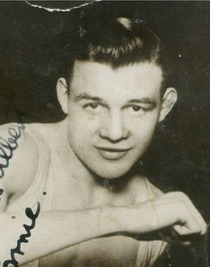 Boxer.  Started boxing at The Ring, Blackfriars Road.  British Lightweight Champion, 1924-25.  The picture source gives his fight history and at Rootsweb we found: “... prominent boxer and lightweight title contender of the 1920/30's, from Herne Hill, London.  He came to Australia and married Ellen Mary Jackson in Sydney on October 17, 1928 and they returned to London soon after... We believe he was employed as a sportsmaster at a public school on his return to England.”

Our colleague, Andrew Behan, has further researched this man.

Ernest Alfred Izzard was born on 25 February 1905, one of the four children of William John Izzard (1876-1966) and Jessie Elizabeth Izzard née Brown (1878-1969). His birth was registered in the Mile End Old Town registration district. On 5 April 1905 he was baptised at Christ Church, Jamaica Street, Stepney, and the baptismal register shows the family living at 39 Smith Street, Stepney. His father's occupation was recorded as a vocalist.

On 24 August 1908 he was admitted into Smith Street School, Tower Hamlets. The family address was 16 Cressy Houses, Stepney Green and he remained at this school until 13 January 1911 when the family moved to Bethnal Green. In the 1911 census he is shown as living at 3 Appian Road, Bow, with his parents, who had allegedly been married for twelve years and whose occupations were both given as music hall artistes, together with his two surviving siblings: William Izzard and Joseph Izzard.

On 29 March 1924 he and his manager, Harry Levene, embarked at Southampton, Hampshire, aboard the S.S. America of the United States Line as 2nd class passengers to travel to New York, USA. His home address was given on the ships manifest as 96 Vaughan Road, Camberwell, SE5 and his occupation was recorded as a boxer. The ship arrived in America on 8 April 1924. They both returned to England, arriving in Southampton on 19 July 1924 aboard the S.S. Berengaria of the Cunard Steamship Shipping Line.

On 4 October 1927 together with his manager, Charlie Lewis, and two other boxers, John Elliot and John Sullivan, they embarked from the Port of London aboard the T.S.S. Hobson's Bay of the Australian Commonwealth Line as 3rd class passengers travelling to Sydney, Australia. The ship's manifest records their U.K. address jointly as 21 Museum Chambers. Bury Street, London, WC, and states that Australia is their country of future permanent residence.

On 17 October 1927 he married Ellen Mary Jackson (1906-1989) at the Church of St John the Evangelist, 120 Darlinghurst Road, Darlinghurst, Sydney, New South Wales, Australia and they returned separately to England. His wife travelled aboard the S.S. Hobson's Bay, now of the Aberdeen & Commonwealth Line as a Helen Izzard, a 3rd class passenger, from Sydney, via Suez, arriving in Southampton on 12 February 1929, giving 33 Tyrwhitt Road, Brockley, as her UK permanent address.

It was not until 2 July 1932 that his parents actually married at Holy Trinity Church, 1 Hurst Rd, Lamorbey, Sidcup, DA15 9AE. The marriage register shows that his parents were living at 14 Montrose Avenue, Lamorbey, Kent, his father's occupation was recorded as a printer's warehouseman and his mother as a launderess.

Electoral registers for 1936 and 1937 show him and his wife, who was listed as Helen Mary Izzard, at 14 Lewisham High Street, London, SE4, but the registers for 1938 show him listed with his parents at 2 Marlborough Park Avenue, Sidcup, Kent.

His wife left Southampton on 9 April 1938 aboard the S.S. Largs Bay of the Aberdeen & Commonwealth Line as a Cabin Class passenger to live permanently in Sydney, Australia, the ships manifest showing her to have been a milliner of 14 Lewisham High Street, London, SE4, and having divorced him she eventually was remarried to a Robert Stanley Davidson on 11 December 1948.

The 1939 England and Wales Register shows him living with his parents at 64 Manor Avenue, Brockley. His occupation was recorded as a collector & inquiry agent - radio hire purchase, whilst his father was by now shown as a journeyman printer's warehouseman & packer.

He died, aged 65 years, on 8 December 1970 in Bexley Hospital. He was cremated on 16 December 1970 and his ashes were scattered. Probate records confirm that his address had remained as 64 Manor Avenue, Brockley, London, SE4 and when probate was granted on 15 January 1971 his effects totalled £363-0s-0d.

This section lists the memorials where the subject on this page is commemorated:
Ernie Izzard

From their website: "We were founded by HRH The Duke of York, later HM King G...

Cricketer, whose real name was Bripumyarrimin. He was a member of the Austral...