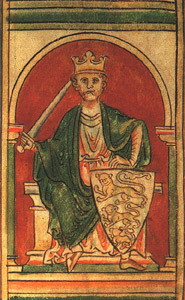 Richard the Lionheart.  Born Oxford, son of Henry II. King of England 6 July 1189 - death. Also ruled parts of France. More French than English, he spent much of his live in Southern Europe, mainly at his mother Eleanor of Aquitaine's court in Poitiers or at his own castle,Chateau Gaillard, on the Seine. Spent years on Crusade in Cyprus and the Holy Land, described by the Arab history writers as a brave and terrifying warrior. The Royal Arms of England is his coat of arms unaltered. Died in Aquitaine. Succeeded by his brother John.  From 1948 on there have been suggestions of Richard's homosexuality, based on him living apart from his wife and having no children. He was also very good at composing and singing ballads.

This section lists the memorials where the subject on this page is commemorated:
King Richard I

Became king aged 10, following the deaths of first his elder brother, then hi...

Infanta of Spain, daughter of King Phillip III. She was considered as a possi...