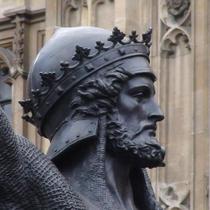 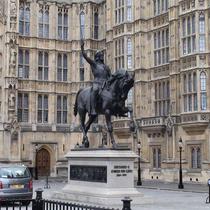 {The sides have bronze relief panels which we are told depict Richard in battle and pardoning the archer that mortally wounded him.}

This bronze statue is considered Marochetti's finest. It was first exhibited outside the Crystal Palace in 1851 and then, by public demand, a bronze version was erected here in 1860. The sword was bent by a bomb in WW2 but has since been straightened.

See Edward the Black Prince for a copy of this statue and an explanation of why you might find it familiar.

We can't view the panels on the sides of the plinth because the very polite police officer won't allow us any closer than the entrance to this parking area.

This section lists the subjects commemorated on the memorial on this page:
Richard I statue

This section lists the subjects who helped to create/erect the memorial on this page:
Richard I statue

The bronze statue depicts the Queen as she would have looked when she started...

Unveiled by the Duke of Connaught and we thank Jamie Davis for finding this l...