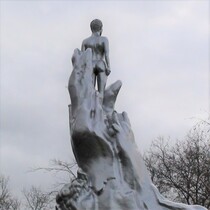 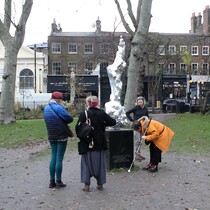 {On the west face:}
"I do not wish women to have power over men; but over themselves"

The quotation is from Wollstonecraft's 1792 'A Vindication of the Rights of Women' where she reports Rousseau's comment: ""Educate women like men and the more they resemble our sex the less power will they have over us."  Wollstonecraft responds "This is the very point I aim at. I do not wish them to have power over men; but over themselves."

We have chosen to show the back view in close-up rather than the full-frontal as favoured by most of the media, including the Guardian. This aspect shows the vigour in the plume of organic matter on top of which stands the figure. From the front one sees an inert, naked Barbie-doll, with perfect figure and bouffant pubic hair and with head-hair reminiscent of Hambling's own. Our long-shot shows just how small this figure is, perhaps less than 50cm, so it's not surprising that the modelling of the facial features is rather basic.

Hambling has stated that the figure represents "everywoman" but clearly that's not the case: the figure is Caucasian with the Western idealised body. It excludes the fat, the thin, the black, the Asian, the disabled, etc. etc. We think Hambling is attempting that old allegorical trope where a semi-naked female figure is used to represent Virtue or Wisdom, or whatever.  But it just doesn't work - you can't use a specific, idealised, woman to represent all women with all their differences and imperfections.

On the plus side, we should be grateful that Hambling did not feel the need to place a cigarette in the figure's hand.  The effigy has a strong air of defiance - the perfect mood for a Wollstonecraft memorial. The thrusting organic column has been compared with the birth canal, and to us it seems to contain multiple attempts at the female form that have been wiped out and reworked almost to destruction. The figurine on top is a disappointing resolution of this energy.

December 2020: In her defence of this memorial, in the Guardian, Hambling refers to Edward Onslow Ford's 1893 'The Drowned Man’: Monument to Percy Shelley (coincidentally son-in-law to Wollstonecraft). This does indeed show a poet naked. But Shelley died in a shipwreck, as indicated by the title of the work.  The monument is specifically referencing his manner of death, in which his corporality was intrinsic. The nakedness is Shelley's nakedness, not that of an 'everyman'. (The work is factually incorrect given Wikipedia's report "Shelley’s badly-decomposed body washed ashore at Viareggio ten days later and was identified by Trelawny from the clothing...".) Hambling has previously claimed that the figure does not represent Woolstonecraft but she undermines that in this interview: "“The figure had to be nude because clothes define people,” she says. “Put someone in country tweeds and they become horsey. Put someone in period dress and they become part of history. I didn’t want to do that to her.”"  Hambling herself seems confused about just who or what the figure represents.

We first heard about plans for this statue in 2011, at the same time that Wollstonecraft's nearby green plaque was unveiled to mark the 100th International Woman's Day.  The campaign, 'Mary on the Green' was reported as working towards a statue of Mary Wollstonecraft. It's not clear when or why that became a statue 'for' Wollstonecraft rather than 'of' Wollstonecraft. This important distinction was not widely understood and when the naked statue was unveiled many were outraged at this apparent disrespectful representation of Wollstonecraft, compared with the hundreds of statues of famous men who are always shown "with their pants on" to quote historian, Dr Hannah Greig, who was moved to investigate.

This section lists the subjects commemorated on the memorial on this page:
Mary Wollstonecraft, statue for

This section lists the subjects who helped to create/erect the memorial on this page:
Mary Wollstonecraft, statue for

From the Trust's website: "The aim of People's Postcode Trust is to support s...

Oddly we can find no information about a Sheila Millward associated with Woll...

At Berliner-Schloss (with heavy use of translation tools) we learn that this ...