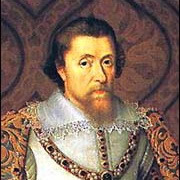 Born Edinburgh Castle, son of Mary Queen of Scots. By the age of 13 months his father, Darnley had been murdered and his mother forced to abdicate, making him King James VI of Scotland. He had been educated to rule as a monarch with limited power and his Protestant advisors attempted to use him as a puppet king but his Catholic friends worried them so the advisors (possibly encouraged by Elizabeth) imprisoned their king. He escaped, took his country back and decided to rule as absolute monarch, answerable only to God. When Elizabeth sentenced Mary to death James did not plead for his mother’s life too strongly. Even after Mary's execution Elizabeth did not officially recognise James as her successor. At this point you could say that the unicorn of Scotland had been tamed by the English virgin, if you were feeling poetic.

As king of Scotland, James was clever enough to marry and produce an heir and spare, which Elizabeth failed to do. Eventually Elizabeth died and James was invited to take the English throne. He travelled to London with a large entourage and all the pomp he could muster. His vision of Scotland and England uniting as two equal countries into one Great Britain seemed about to come true. However James believed passionately in the divine right of Kings and refused to compromise with the English statesmen. To them London seemed full of powerful Scottish Protestants throwing their weight around. A group including Guy Fawkes decide to do something about it. Ethnic cleansing was their solution - kill off all the Scots in London, starting with the king himself in what became known as the Gunpowder Plot (failed). James had the Union Flag designed but the troubles between Scotland and England were far from over. He commissioned The King James Bible, printed in English in 1611 (but see Queen James Bible where we learn that "King James I was a well-known bisexual").  Died at Theobalds House, Cheshunt.

This section lists the memorials where the subject on this page is commemorated:
King James I