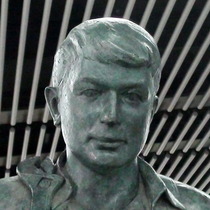 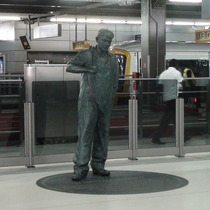 [On the slate circle on which he stands:}
The Plumber's Apprentice
This statue was erected on the site of its last Livery Hall by The Worshipful Company of Plumbers to celebrate the 400th anniversary of the granting of its Charter by King James I in 1611 and to recognise the support given by the Company to the training of apprentices.

{Around the edge of the circle:}
Benefactors: the Worshipful Company of Plumbers, the Barber family, the Guest family, BPEC, British Gas – Apprentice Training, SNIPEF and many others.

{In a small ring at the back of the slate circle:}
Sculptor Martin Jennings 2011.

This 7 foot statue was unveiled to mark the completion of the Cannon Street Station renovation and the 400th anniversary of the granting of the Plumbers' royal charter.

The Plumbers' Hall was compulsorily purchased in 1863 to make way for the expansion of the railway station.

View from the Mirror have a history of Cannon Street station with lots of pictures.

This section lists the subjects commemorated on the memorial on this page:
Plumber's Apprentice statue

This section lists the subjects who helped to create/erect the memorial on this page:
Plumber's Apprentice statue