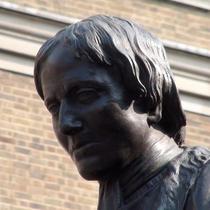 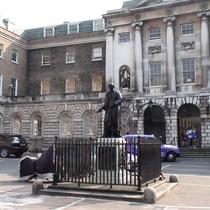 {On the cartouche on the front of the plinth:}
Thomas Guy sole founder of this hospital in his lifetime, AD MDCCXXV (1725}

11 June 2020, following Black Lives Matter demonstrations, a joint statement from King's College London, Guy's & St Thomas' NHS Foundation Trust, and Guy's & St Thomas' Charity announced that this statue, and that of Robert Clayton, will be removed in a few weeks.

September 2021: Another statement reported in the Daily Mail: "Guy's Hospital has confirmed it will move a statue of its founder Thomas Guy (pictured before it was boarded up) to a less prominent position" and "the statue of Sir Robert Clayton will have a plaque added explaining his slave trade links".

October 2022: King's College London issued a statement which includes: "Today, the statue has been de-hoarded while experts carry out essential restoration work that is legally obliged due to the Grade II listed status of the statue. While the work is carried out and permanent interpretation is developed, temporary interpretation will be installed by GSTF which outlines Thomas Guy’s connections to the Trans-Atlantic slave trade."

This section lists the subjects commemorated on the memorial on this page:
Thomas Guy statue

This section lists the subjects who helped to create/erect the memorial on this page:
Thomas Guy statue