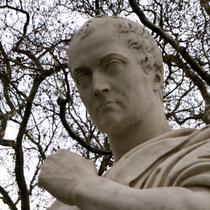 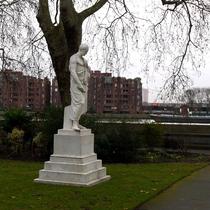 Noting the stance and the toga, Osbert Sitwell described this statue as "boredom rising from the bath." Peter Duby tells us that the statue was originally presented by his widow to Lloyd's {insurance, not bank} in 1847; Lloyd's presented it to the London County Council in 1915 and it was subsequently placed in its current position.

There is a bronze copy of this statue in Liverpool and a different statue, also in Roman dress, in the cathedral in Chichester, his constituency.

This section lists the subjects commemorated on the memorial on this page:
Huskisson statue

This section lists the subjects who helped to create/erect the memorial on this page:
Huskisson statue