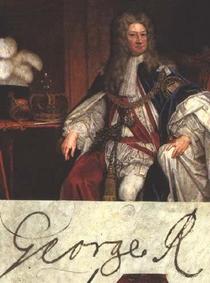 Born Hanover. When the last of Queen Anne's 17 children died without issue (no one could accuse her of not trying) there were lots of Catholic potential claimants, but Britain wanted a Protestant heir. Looking further afield, the Act of Settlement named some descendants of James I, Sophia and her son George, who ascended the throne in 1714, unable to speak English.

The sad story of his wife, Sophia Dorothea of Celle, is told in the 1948 film 'Saraband for Dead Lovers'. Mother of the future George II, she never came to Britain, having been effectively imprisioned in Castle of Ahlden in Saxony, from 1695 till her death in 1726.

This section lists the memorials where the subject on this page is commemorated:
King George I

The spire is an astonishing sight, one of our London favourites. It is a tall...