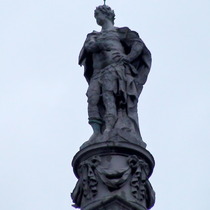 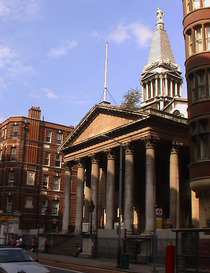 The spire is an astonishing sight, one of our London favourites. It is a tall stepped pyramid with 24 steps topped with a statue of King George I in Roman costume and standing on a Roman altar. Around the base are swags and some royal crowns. Gambolling at the corners are two lions and two unicorns (with gilded horns). The lion and the unicorn are heraldic supporters on the Royal Coat of Arms of the UK, the lion standing for England, and the unicorn for Scotland.

The statue was funded by William Hucks MP, wealthy parishioner and the Royal Brewer. The statue, the lions and the unicorns were made by Edward Strong, the master mason for the church.

The lions and unicorns which we see now are reconstructions, created by the sculptor Tim Crawley and installed on the tower in 2006. The originals were commissioned by Hawksmoor without the permission of the Commissioners, who initially refused to pay for them. They were removed in the 1870s for reasons that remain unclear.

"When Henry the Eighth left the Pope in the lurch
The protestants made him the head of the church,
But George's good subjects, the Bloomsbury people,
Instead of the Church made him head of the steeple."

Church designed by Hawksmoor. Their website has lots of interesting stuff but none of the pictures of the stunning tower on this Hawksmoor church does it justice. The stepped steeple is based on the Mausoleum at Halicarnassus.

This section lists the subjects commemorated on the memorial on this page:
King George I statue, WC1

This section lists the subjects who helped to create/erect the memorial on this page:
King George I statue, WC1

This section lists the other memorials at the same location as the memorial on this page:
King George I statue, WC1