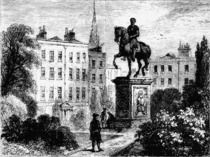 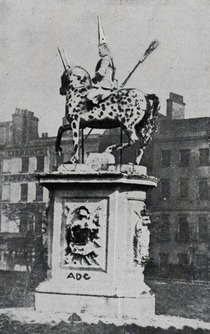 A gilded statue of George I was created for the Duke of Chandos in about 1716. Modelled by C. Buchard (or C. Buchan, depending on source) and cast in lead by John Van Nost this was installed at Canons, the Chandos stately home, but this was demolished in 1747 and the contents dispersed. The statue was bought by the residents of Leicester Square, apparently thinking it represented the current king, George II, and installed at the centre of the Square. Re-gilded in 1812, “The horse is said to have been modelled after that of Le Sœur at Charing Cross; whilst the statue of George I was considered a great work of art in its day“ however it was also the butt of jokes and extreme vandalism amounting to dismemberment. It was finally removed in 1872. The Square also sank into a disgraceful state and there was a strong movement to have it built over. But in 1874 Albert Grant bought the Square and laid it out as a public garden.

One of our images and much of the info comes from British History Online. The image of the vandalised statue comes from English 18th Century Portrait Sculpture - a site that seems to be disintegrating itself.

Notes And Queries: Medium Of Inter-Communication For Literary Men, Artists, Antiquaries, Genealogists, Etc. 1862 July-Dec, Page 151 contains some comments that show that in 1862 there was no certain knowledge of various points in this statue's demise.

In his 1928 “People’s Album of London Statues” (p. 77-78) Osbert Sitwell also tells the story of this statue but with some different details: it was erected here in 1748 by Frederick Prince of Wales (1707 – 1751, the subject’s grandson); removed, or possibly buried, in 1851 for 11 years when a building was erected at the centre of the Square and re-erected minus one leg. According to Sitwell the vandalism meant that, by the time the paint-job was applied, the horse was entirely riderless, which it would have to have been to make sense of the rocking-horse comparison.  And the image we reproduce here, with the dots, which suggests this was not the case, looks like a touched-up photo.

Very confusingly, it appears that there was another statue of George I in Grosvenor Square, also by van Nost, also gilded lead and also removed due to vandalism. Another day, another post.

This section lists the subjects commemorated on the memorial on this page:
King George I statue, WC2 - lost

This section lists the subjects who helped to create/erect the memorial on this page:
King George I statue, WC2 - lost