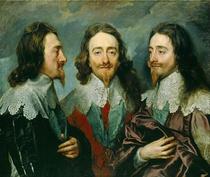 Born Fife. Until the age of 11 he was only the 'spare' but then his 18-year old brother Henry died (probably of typhoid) and Charles became the heir, ascending the throne in 1625 on the death of his father, James I. His wife (1625) Henrietta Maria of France was Catholic, he was a High Anglican.

Only 5 feet 4 inches tall, Charles was a firm believer in the divine right of kings and fell out with Parliament in a big way, mainly over money. This all led to the Civil War (1642 - 1646). Charles eventually surrendered and was tried for treason by a tribunal with 135 commissioners who acted as judges and jury, although only 68 ever participated at the trial. He lost by one vote and was beheaded outside the Banqueting House in Whitehall.

Brentford High Street have carried out some magnificent research on Brentford...