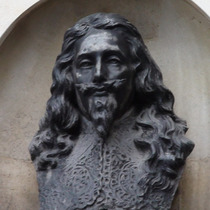 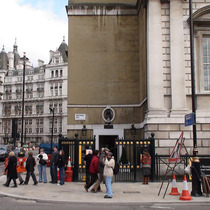 {On the plaque below the bust:}
His Majesty King Charles I passed through this hall and out of a window nearly over this tablet to the scaffold in Whitehall where he was beheaded on 30th January 1649.

In about 1945 Hedley Hope-Nicholson, a Charles I fan and central member of the Society of King Charles the Martyr, found three lead busts of Charles in a Fulham builder's yard. The busts have been dated to about 1800. The best was placed here and another at nearby St Margarets church.

A nearby modern information board informs: "King Charles I walked to his death through a Banqueting House window, on the 30th January 1649. the king crossed the scaffold, laid his head upon the block, and "stretched forth his hands". At this sign, the executioner struck Charles' head from his body.

He had been found guilty of treason by a court of Parliamentarians. For seven years England had been torn apart by a Civil War between its Parliament and King. Charles' execution was the cataclysmic event that ended the war.

The Banqueting House is the only surviving building of Whitehall Palace, which burned down in 1698. Designed in the new classical style by Inigo Jones, it was completed in 1622 and was used for diplomatic ceremonies and court entertainments. In 1635, Charles I commissioned Peter-Paul Rubens to paint magnificent ceiling paintings which are still inside."

Which window he walked through or where precisely he was beheaded is not known.  The best guess seems to be that the window was in what is now the blank wall above the bust.

Opposite the Banqueting House the archway of Horse Guards Parade carries a clock. On this face at 2 pm is a black mark, which, it is said, commemorates the death of Charles I. The time of execution had been set for early in the morning but a delay meant it actually took place at 2 pm.  The mark looks to us like an accidental smudge.

This section lists the subjects commemorated on the memorial on this page:
Charles I - beheaded

This section lists the subjects who helped to create/erect the memorial on this page:
Charles I - beheaded

{Inscribed in the stone below the medallion:}The Rt Hon Lord Ashfield PC, 187...

At first we thought this was Henry Leeke, the founder of the school but Ornam...