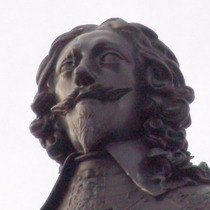 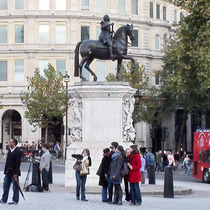 {On a brass plaque in the ground in front of the statue:}
King Charles I, 1625 - 1649. This bronze statue was made in 1633 for Lord Treasurer Weston by Hubert le Sueur. It was acquired for the crown and set up here in 1675. The carved work of the pedestal being executed by Joshua Marshall.
{The sculptor's name can apparently be seen on the horse's hooves.}

Made in 1633 during Charles I's reign, London’s oldest bronze statue was intended for the garden of Weston's house at Roehampton. In 1649 Parliament ordered that it be destroyed but it was hidden and reappeared triumphantly at the Restoration of the monarchy. In 1675 it was erected here. In WW1 it was protected by the erection of a frame and sandbags. In WW2 the statue was moved temporarily to Mentmore and a temporary brick structure was erected to protect the plinth. The plinth was carved by Marshall but its design is thought to be the work of Wren and Gibbons.

The plaque is on the ground, a little behind (north of) the statue.

When Queen Eleanor's Cross was erected here the site was close to the entrance to the Royal Mews attached to Westminster Palace. The Cross was more of a gothic monument - the one in front of Charing Cross station is supposedly a reproduction of it. The Cross was here from about 1291 - 1647, when, royalty being out of favour, it was pulled down. In 1649 Charles I was beheaded on a scaffold outside the Banqueting Hall, just a short trip down Whitehall. On the last Sunday in January his death is commemorated: wreaths are laid at this statue, and prayers are said at the site of his execution. The King's Army (English Civil War Society) march in the procession dressed as 17th-century cavaliers. Many of those responsible for executing the King were hung drawn and quartered here in 1660, and in 1675 this statue of Charles I was erected. A busy little corner.

It has been pointed out that at this junction three important roads meet: The Mall leading to Buckingham Palace (seat of royal power); Strand leading to the City (seat of commercial power) and Whitehall (seat of political power).

This spot serves as the centre of London for the purposes of measuring distances. (But also see Cornhill Standard.) Also, supposedly, the street numbering convention is that the low numbers in a London street should be at the end closest to this spot - a rule much observed in the breach. However, key 'London' into Google Maps and the pin is not plonked here. It lands on The Strand, just north of Waterloo Bridge, on number 355, a Starbucks. No comment. 2015 correction: Google Maps have discovered the centre of London.

The Daily Mail has a very early photo of this statue and the view down Whitehall.

2019: We learnt that when the Queen dies the Garter King of Arms and other heralds will travel from Buckingham Palace to this statue and announce the news. That will not be the only way in which the news is disseminated, obviously.

This section lists the subjects commemorated on the memorial on this page:
Charles I statue

This section lists the subjects who helped to create/erect the memorial on this page:
Charles I statue

French sculptor who spent most of his working life in England working for the...

This section lists the other memorials at the same location as the memorial on this page:
Charles I statue

Ornamental Passions us that "The statue is a copy of one made in 1895 by the ...