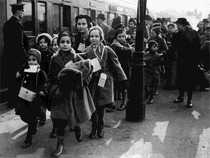 10,000 unaccompanied mainly Jewish children fled from Nazi persecution in 1938 and 1939. This was organised mainly by World Jewish Relief, but many Quakers helped the children at stations on the journey and the Christadelphians assisted to relocate children by founding a hostel. The children were placed in British foster homes, hostels, and farms. At the end of the war most discovered that their families had been killed.

Frank Meisler is a good resource.

This section lists the memorials where the subject on this page is commemorated:
Kindertransport