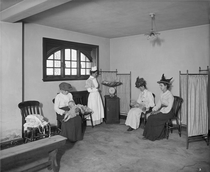 From the always useful Lost Hospitals of London: "The St Francis Hospital for Infants was founded in a small house in Hampstead {6 Denning Road} in 1903 by Helen Levis, {first} wife of the industrial chemist Sir Robert Mond {son of Ludwig}, and Dr. Ralph Vincent. ... a year later, its name was changed to The Infants Hospital ... Following the death of his wife in 1905, Sir Robert Mond financed a purpose-built Hospital in Vincent Square as a memorial to her." There you can also read how it expanded, amalgamated, got renamed and closed.

The photo looks posed to us, and those hats!

This section lists the memorials where the subject on this page is commemorated:
Infants Hospital

Daughter of Lord Paul. She died from leukaemia and the Ambika Paul Foundation...