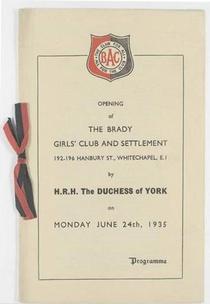 From the picture source website:
The Brady Boys' Club was the first Jewish boys' club in Great Britain and it was founded in 1896 by Lady Charlotte Rothschild, Mrs Arthur Franklin and Mrs N S Joseph. It began in a disused vicarage in Whitechapel and provided boys with recreational and educational opportunities as well as the chance to go on holiday to summer camp. In 1921 a Girls' Club was founded, by Miriam Moses, and in 1936 it moved to brand new modern premises on Hanbury Street which were opened by the Queen Mother (then Duchess of York). The Boys' Club facilities were similiarly modernised in 1938. By the 1950s the Club had expanded into a Settlement offering a wide range of services to all different ages. The Brady Clubs have now become the Brady Maccabi Youth and Community Centre which is based in Edgware whilst the old Hanbury Street site is the home of the Brady Arts and Community Centre.

Spitalfields Life have many photos showing the activities at Brady Clubs.

This section lists the memorials where the subject on this page is commemorated:
Brady Settlement

This building was opened by Her Royal Highness the Duchess of York, June 24 1...