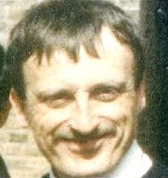 Beaten and stabbed to death by a mob during large scale rioting. Posthumously awarded the Queen's Gallantry Medal.

From an article in the Guardian:
Constables Blakelock and Coombes were attacked by a mob during riots on Broadwater Farm estate {Tottenham} on October 6 1985. The violence was sparked by the death of Cynthia Jarrett, 49, who suffered heart failure during a police raid on her home.  PC Blakelock died at the scene while PC Coombes was so severely wounded he never resumed active duty.  Winston Silcott was convicted of the murder in 1987 but cleared on appeal four years later.

We learn from The Londoneer that, in October 2011, the Bruce Castle museum has a display dedicated to the Broadwater Farm riots.

He joined the Metropolitan Police on 14 November 1980, and was assigned to a response team in Hornsey before becoming a home beat officer in Muswell Hill.

He was murdered, aged 40 years, on 6 October 1985 and his body was buried in East Finchley Cemetery and Crematorium, 122 East End Road East Finchley, London, N2 0RZ. Administration of his estate was granted on 24 February 1986 and probate records show his home address to have been 12 Glenmere Avenue, London, N7. His effects did not exceed £40,000.

This section lists the memorials where the subject on this page is commemorated:
Keith Blakelock