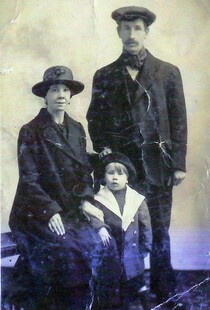 Andrew Behan has kindly provided the following research: Charles William Patrick Staff was born on 4 November 1916 in Poplar, the only child of Charles Staff (1889-1953) and Jane Staff née Ford (1878-1962). He was baptised on 21 November 1916 at St Luke's Church, Stepney and the baptismal records show the family living at 47 Rounton Road, Bow and that his father was a Steam Wagon Driver.

Electoral registers from 1919 to 1930 show the family living at 26 Perring Street, Poplar.

The 1939 England and Wales Register shows him living with his parents at 34 Old Church Road, Stepney, and his occupation was given as a Lorry Driver, whilst his father was a Horse Draysman. He was also an A.R.P. Stretcher Bearer and died, aged 23 years, on 18 September 1940 when a high explosive bomb fell on Saunders Ness Road School, Isle of Dogs, London, E.14, that was being used as Auxiliary Fire Service Sub Station No.35U. He was buried on 23 September 1940 in the City of London and Tower Hamlets Cemetery, Southern Grove, London, E3 4PX and is also commemorated in the Civilian War Dead Roll of Honour, located near St. George's Chapel in Westminster Abbey. This Roll of Honour shows his address was 31 Old Church Road, Stepney.

The photo shows Charles with his parents.

This section lists the memorials where the subject on this page is commemorated:
Charles William Patrick Staff

Infantry regiment of the British army. Originally a militia raised to build a...