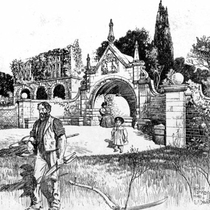 Wife of Henry Reynolds-Moreton, Third Earl of Ducie. There is no portrait and virtually no other information available about her, so we have used a picture of the monument to her in Tortworth Churchyard, Gloucestershire which was designed by William D. Caroe in 1904.

Since we published this subject in 2017 we have found additional information. Her Wikipedia page confirms that she was born as Julia Langston and despite it showing she was born on 7 October 1829, other records, including the memorial tablet at Tortworth Churchyard, give the information as being on 17 October 1829, at Sarsden House, Sarsden, Chipping Norton, Oxfordshire. She was the daughter James Haughton Langston (1796-1863) and Lady Julia Frances Langston née Reynolds-Moreton (1805-1869). Her father was one of the two Members of Parliament for the Oxford constituency. On 26 November 1829 she was baptised at the parish church in the Chapel of St James, Sarsden House.

On 24 May 1849 she married her first cousin, Henry John Reynolds-Moreton (1827-1921) at St George's Church, Hanover Square, Westminster, where the marriage register shows his rank as 'The Honourable' and that he was living at Belgrave Square, Westminster. Her address was recorded as Piccadilly, Westminster. Their daughter, Constance Emily Reynolds-Moreton (1850-1929) was born on 18 June 1850 and when she was baptised on 4 August 1850 at St George's Church, Hanover Square, the baptismal register shows the family residing in Piccadilly.

As her husband was the eldest son of Henry George Francis Reynolds-Moreton, 2nd Earl of Ducie, he was titled the The Honourable Lord Henry John Reynolds-Moreton and she was Lady Julia Reynolds-Moreton. The 1851 census shows her as Lady Moreton living at 1 Ennismore Place, Knightsbridge, with her daughter, together with a butler, a lady's maid, two housemaids, a cook, a nurse and a page. (Ennismore Place was subsequently renamed and is now Ennismore Gardens).

Her father-in-law died on 2 June 1853. Her husband succeeded to the title, becoming the 3rd Earl of Ducie and she became Julia, Countess of Dulcie. Their son, Henry Haughton Reynolds-Moreton (1857-1920), was born on 4 March 1857 and when he was baptised on 2 May 1857 at St Peter's Church, Eaton Square, Pimlico, the baptismal register shows the family residing in Eaton Place, Pimlico.

In the 1861 census she is recorded at Tortworth Court, Tortworth, Wotton-under-Edge, Gloucestershire, with her husband, who was shown as the Lord Lieutenant of Gloucestershire and Captain of the Yeomen of the Guard, their son, Lord Henry, and daughter, Lady Constance, together with a governess, a butler, a groom of chambers, an under butler, a footman, an errand boy, a housekeeper, two ladies maids, a cook, three housemaids, two still room maids, a laundry maid, a dairy maid, a kitchen maid, a scullery maid, a nursery maid, a coachman and two grooms.

The 1881 census describes her a Peeress living at 16 Portman Square, Marylebone, with her 'Peer of the Realm' husband, who was still the Lord Lieutenant of Gloucestershire, together with a butler, a valet, an under butler, a footman, a boy, a housekeeper, a lady's maid, a maid, two laundry maids, a kitchen maid, a scullery maid, three housemaids and a still room maid.

Probate records confirm that her home remained as Tortworth Court and that she died, aged 65 years, on 3 February 1895 at Villa Leserb, Cimiez, Nice, France. Administration, with a will, was granted to her widower husband and her effects totalled £8,036-5s-9d. her body was brought back to England and she was buried in St Leonard's Churchyard, Tortworth, Wotton-under-Edge, Gloucestershire, on 14 February 1895.

This section lists the memorials where the subject on this page is commemorated:
Julia, Countess of Ducie

Shipbuilder and philanthropist. Founder of a shipyard in Blackwall, which was...