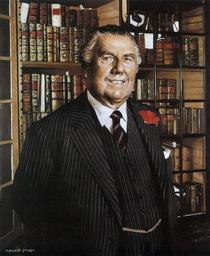 Member of the City of London Court of Common Council 1959-84, Chairman of the Metropolitan Public Gardens Association, pastmaster of the Company of Gardeners and a leading light in the many gardens and open spaces in the City. Born Crouch End.  Published two books: 'Beauty and the Borough' and 'The Flowering City'. His nickname was 'Flowering Fred' but looking at his portrait we somehow don't think he did much weeding himself.

A comprehensive biography can be found on his Wikipedia page, but our colleague, Andrew Behan, has also added some further research.

Frederick Ernest Cleary, CBE, was born on 11 April 1905, the son of Frederick George Cleary (1880-1966) and Ada Kate Cleary née Chinery (1880-1961). He was baptised on 18 February 1906 at Holy Trinity Church, Haverstock Hill and the baptismal register shows the family living at 199 Prince of Wales Road and gives his father's occupation as an electrician. The 1911 census shows him as a schoolboy living with his parents at 24 Hugo Road, Tufnell Park.

The 1939 England and Wales Register confirms his address and shows him as a chartered surveyor and also as an Air Raid Precautions (ARP) senior warden at Hornsey. Also registered at this address, in addition to his wife, were his parents, his father being listed as a GPO electrician.

He was a Fellow of the Royal Institution of Chartered Surveyors (FRICS) and having served as a member of the Festival ((referring we presume to the Festival of Britain) sub-committee, Hornsey Borough Council, the London Gazette reports that he was made a Member of the Most Excellent Order of the British Empire (MBE) in the 1952 New Year Honours List.

When he and his wife departed from Southampton on 28 August 1953 as 1st class passengers bound for New York, USA, aboard the RMS Caronia of the Cunard Steam-Ship Company the ship's manifest recorded him as chartered surveyor and gave their address as c/o E. S. V. London, W1. When they returned, arriving at Southampton on 2 November 1953 as 1st class passengers aboard the RMS Queen Elizabeth, the manifest showed him as a director and their address as Bishops Ride, Sheldon Avenue, Highgate, N6.

As the Chairman of the Metropolitan Public Gardens Association, in the 1979 Queen's Birthday Honours List the London Gazette shows he was made an Ordinary Commander of the Civil Division of the Most Excellent Order of the British Empire (CBE).

This section lists the memorials where the subject on this page is commemorated:
Fred Cleary

Opens (mainly private) gardens to the public to raise money for charity. Gre...

A local group dedicated to the economic, environmental and social regeneratio...

We are not certain that these dates are for her life or for the time that she...