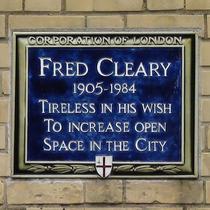 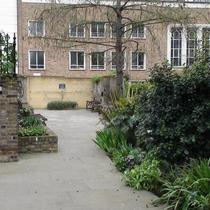 Fred Cleary, 1905 - 1984, tireless in his wish to increase open space in the City.
Corporation of London

This garden was once the site of a Roman bath house. A nearby modern information board explains: As a result of wartime bombing of the City this previously built up area was destroyed and the site released for post-war development as a leisure and amenity area.
To mark their centenary in 1982 the Metropolitan Public Gardens Association funded the laying out of Cleary Gardens.
The first recorded reference to Huggin Hill is in around 1260 as Hoggene Lane, suggesting that it is derived from the Old English word for a place where hogs were kept. Huggin Hill was known as Huggin Lane prior to 1940 and it was also known as Sporones Lane at various times.

In 1964 the remains of a substantial Roman baths were discovered near this site. It is thought they were built on terraces, dug deeply into the hillside overlooking the Thames, where a constant flow of clear spring water fed the baths. They were built around 80 AD, extended in the early 2nd century, but demolished by the end of the 3rd century.

This section lists the subjects commemorated on the memorial on this page:
Fred Cleary

Member of the City of London Court of Common Council 1959-84, Chairman of the...

This section lists the subjects who helped to create/erect the memorial on this page:
Fred Cleary