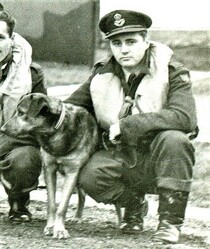 The American Air Museum in Britain website gives details of his life, how he joined the Royal Air Force Volunteer Reserve in 1941, serving initially as a Flying Officer in No.121 Squadron, his injuries and service in the United States Army Air Forces. He was awarded the Air Medal with 4 oak leaf clusters, the World War II Victory Medal and the European-African-Middle Eastern Campaign Medal with 2 bronze stars.

This section lists the memorials where the subject on this page is commemorated:
John Innes Brown III

Marshal of the RAF.  Born Hungerford.  Served in WWI first as a motorcycle de...