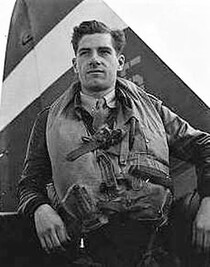 In 1940 he was training as a service pilot at the Dallas Aviation School, Texas, USA, and later that year he joined the Royal Air Force Volunteer Reserve in Canada via the Clayton Knights Committee before coming to England where he began operational training. In 1941, as a Flying Officer, he was attached to No.121 Squadron  based at RAF Kirton-in-Lindsey, Lincolnshire.

He volunteered to go to Malta, and on 20 April 1942 took off from the aircraft carrier USS Wasp as part of Operation Calendar. He was transferred to No.126 Squadron and took part in the Defence of Malta until 29 September 1942 when he was returned to RAF Debden to became part of the 336th Fighter Squadron of the 4th Fighter Group in the 8th Air Force of USAAF.

This section lists the memorials where the subject on this page is commemorated:
Douglas Booth

Pilot Officer Frank Norman Bartlett Bennett was born on 30 May 1919, the seco...

Soldier. Born Frank Bernard Wearne. He was a second lieutenant in the 3rd Bat...