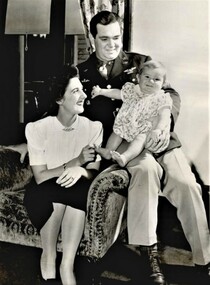 Despite the information contained in our Picture Source that Lieutenant Colonel Forrest Patty Dowling was born in Oklahoma, USA, in 1917, our research shows that he was born on 18 July 1916 in Dallas, County Dallas, Texas, USA. He was the younger of the two children of Forrest Patty Dowling (1887-1970) and Idabelle Dowling née McKay (1894-1918). His elder sister Idabelle Dowling, who was born on 13 March 1913, sadly died aged 8 months on 3 December 1913.

The 1920 United States Census shows him living in Greenville, Hunt County, Texas, USA. His father was remarried to an Alice A. Brown (1899-1996) and they had a son, William Jackson Dowling (1922-1996) who was born in Oklahoma. The 1930 U.S. census confirms that they were living in Oklahoma City, Oklahoma County, Oklahoma, USA.

Our Picture Source states that he trained as a service pilot in Tulsa, Oklahoma, and in 1940 went to Canada where he joined the Royal Air Force Volunteer Reserve (RAFVR). He came to England in 1941 and was assigned, as a Pilot Officer, to No.71 (Eagle) Squadron.

He married Dinah Baxter (b.1920), who was a Section Officer in the Women’s Auxiliary Air Force, the marriage being registered in the 4th quarter of 1941 in the Uxbridge registration district. Their son, Michael Dowling, was the first baby born to an American pilot and a British mother in the Second World War. Their daughter, Stephanie Lynn Dowling, who was born in Dallas, Dallas County, Texas, on 27 January 1949, tragically died aged 2 days, on 29 January 1949.

This section lists the memorials where the subject on this page is commemorated:
Lieutenant Colonel Forrest Patty Dowling

It was from this underground bunker that the air defence of London and the s...