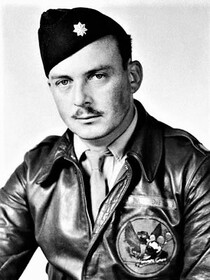 According to the American Air Museum in Britain website he joined No.71 Eagle Squadon in 1942 but whether this was as a member of the Royal Canadian Air Force or the Royal Air Force Volunteer Reserve is unknown. He was commissioned as a Flight Lieutenant during this period of his service.

He married Doreen Rachel Cohen (1920-1971) in the 3rd quarter of 1942 in the Paddington registration office. On 9 October 1942 he was transferred to the 336th Fighter Squadron, 4th Fighter Group, in the 8th Air Force of the United States Army Air Forces, initially serving in the rank of Major and was their Commander from 4 March 1943 to 1 September 1943.

He served in the Korean War and was the Commanding Officer of Ent Air Force Base, Colorado, USA, when on 31 July 1961 he retired from the USAF as a Lieutenant Colonel.

He died, aged 84 years, on 7 October 1993 in Hillsborough County, Florida, USA and was buried in Plot K, Grave 298 of the National Memorial Cemetery of the Pacific, 2177 Puowaina Drive, Honolulu, Honolulu County, Hawaii, USA.

This section lists the memorials where the subject on this page is commemorated:
Lieutenant Colonel John Guilbert DuFour

A watch house was an early form of local police station but we've heard it sa...