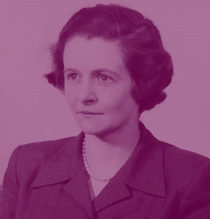 Jean Leslie Scott, The Finchley Society’s founder, was born on 21 March 1921 and lived in Finchley since her childhood. After attending Downhurst School Hendon and Imperial College London (where she attained a B Hons degree in Chemistry) she worked as a food analyst during the war. After the war she became a teacher of Chemistry and General Science at Public and Grammar Schools, and taught Maths and Physics to Engineers at Technical Colleges.

In 1955 she was elected to Middlesex County Council to serve Finchley West and then, on its formation in 1964, as a Greater London Council Member, serving Finchley altogether for almost twenty years. She served on a great number of committees. She chaired the GLC’s Green Belt, Open Spaces and Allotments Committee, and was a member of theGLC's Historic Buildings Board where she sat alongside such luminaries as Sir John Betjeman, Sir John Summerson and Osbert Lancaster.

Jean Scott became increasingly dismayed by the pace and scale of local redevelopment and upon the threatened demolition of historic cottages in Lodge Lane enlisted the support of the local press to band together a group of like-minded people, aided and abetted by Spike Milligan, and so in 1971 The Finchley Society was born.

Jean Scott became involved in every aspect of the Society, chairing AGMs, serving on the Executive and Planning Committees and taking a full part in its outings and activities. She was instrumental in forming and was latterly chairman of the Friends of College Farm. Post 1975 she was still being listed as 'Miss Jean Leslie Scott' so we believe she never married (where would she have found the time?)

For the last decade, until the end of her life in 1993, she fought the onset and development of multiple sclerosis. She died on 10 November 1993 and probate records shows that she lived at 19 Green Lawns, Moss Hill Grove, N12. Her estate totalled £132,410-00. In 1995, the Society launched the annual Jean Scott Memorial Lectures to honour her life and work.

This section lists the memorials where the subject on this page is commemorated:
Jean Scott

Started in the early 1970s as Wapping Parents Action Group. Transformed into ...