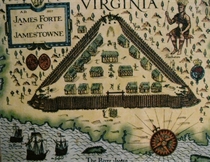 The first permanent English settlement in the Americas, and named by some as the place where the British Empire began.105 so-called 'adventurers' sailed in three ships, the 'Susan Constant', the 'Discovery' and the 'Godspeed'. The site of the settlement was chosen for its good defensible position, but it was too poor and remote for agriculture, swampy, plagued by mosquitoes, and only had brackish tidal river water which was unsuitable for drinking. In addition, the settlers arrived too late in the year to get crops planted, and in a few months, 80% of the party were dead. In spite of problems with supplies, mismanagement and attacks from local Indians, the settlement survived and prospered.

Note that these settlers were well in advance of the better-known Mayflower pilgrims who set sail in 1620.

This section lists the memorials where the subject on this page is commemorated:
Jamestown Settlement

Built on the site of Woodford Hall, a former Georgian mansion. It was the gif...

Garraway claimed to be the first to sell tea to the public, but not, as far a...