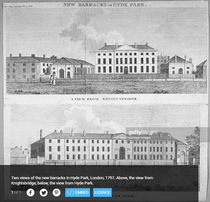 This site was first developed in 1795 for use by the Horse Guards. The barracks were designed by architect James Johnson and buildings were added up to 1803. (British History Online – 1st Barracks does not support Wikipedia’s claim that, in 1857 a riding school and stables designed by Philip Hardwick were added, though Hardwick did work on Wellington's Riding-School at Buckingham Palace, now demolished).

By 1854 the living conditions in the barracks had become a scandal and eventually, in 1878-80, the entire site was rebuilt, to designs by Thomas Wyatt. These are described at British History Online – Victorian Barracks. The layout followed the original arrangements, including placing the living accommodation above the smelly stables. No one seemed surprised that “By the early 1960s the barracks was considered to be a military slum” and needed redevelopment again.

The current buildings were designed by Sir Basil Spence, and completed in 1970. It is the base for the Household Cavalry who service nearby Buckingham Palace and all the ceremonial state and royal events in London that require horses.

Since 2016 there have been reports that this site is to be sold off and the barracks moved elsewhere. The terror threat level and the difficulty of finding another suitable central location have delayed the process.

From British History Online – 1st Barracks : “When the barracks was rebuilt in 1878–80 one set of royal arms {from the 1795 building} was saved for installation in the small pediment on the Knightsbridge front of the new Officers' Quarters. The supporters were replaced (apparently because the original lion and unicorn were on the wrong sides). The coat of arms (but not the supporters) was again saved when the barracks was rebuilt in 1967–70 and now adorns the ante-room in the officers' mess, the only known fragment of the original building to survive.”

Items rescued from the Victorian barracks include the pediment and 4 military busts.

Our image shows the original 1795 buidlings. We chose this image because images of the Victorian barracks and the modern barracks are relatively easy to find.

Note: there were other barracks nearby, south of Knightsbridge (Old Barrack Yard still exists to help locate the site) from at least 1780 and demolished in the 1850s. Confusingly these were also known as Knightsbridge Barracks.

This section lists the memorials where the subject on this page is commemorated:
Hyde Park Barracks / Knightsbridge Barracks

Part of the Donkey Sanctuary, we think.