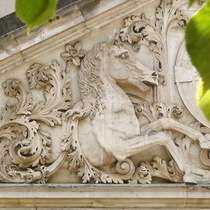 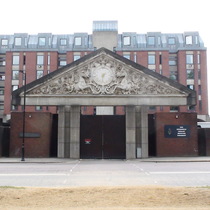 This pediment comes from the Victorian barracks. From British History Online - Victorian barracks: “The riding-school's front to Hyde Park was one of the most appealing features of the whole barracks. Because of the sloping site, the exposed wall at this end was greatly reduced, giving the impression of an unusually low building and greatly emphasising the weight of Earp's carved stone pediment filling the gable end. Here the function of the building was vividly expressed in stone by the heads and forequarters of rearing horses emerging from scrolling acanthus leaves. When the barracks was demolished the pediment was saved and incorporated into the new main gateway”.

And from British History Online - New barracks: "The ceremonial nature of the main gate is made plain by its large pediment incorporating the carved tympanum, by Thomas Earp, from the Victorian riding-school, the original oculus {round window} being filled by a clock".

Busts of 4 military men from the Victorian barracks were also retained and are on display in the new building.

This section lists the subjects commemorated on the memorial on this page:
Hyde Park Barracks - Victorian

This section lists the subjects who helped to create/erect the memorial on this page:
Hyde Park Barracks - Victorian

This section lists the other memorials at the same location as the memorial on this page:
Hyde Park Barracks - Victorian

The black and white photo showing the lost commemorative board comes from A L...