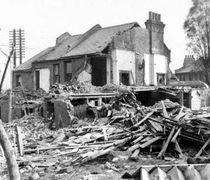 This was the last Zeppelin raid on London. The airship had intended to bomb industrial sites, but had been blown off course. Normally these ships could be brought down by anti-aircraft fire, but it was flying unseen above the clouds. The bombs fell on what was then Glenview Road, killing fifteen civilians and destroying several homes.

The street is now Nightingale Grove. The bomb landed on the north-most section, now occupied by the new houses, 11-21 (odd). Information from Running Past.

This section lists the memorials where the subject on this page is commemorated:
Hither Green Zeppelin raid

Chief Electrician on the RMS Titanic. A résumé of his life can be found on th...

Called to attend a fire in a restaurant in the King’s Road, Chelsea, he enter...