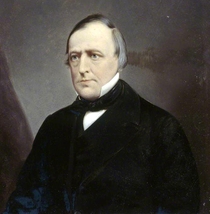 Naturalist. Born at 62 (the site of which is now number 271) High Street, Epping, Essex. He was the author of the first catalogue of British butterflies and moths, and named a number of new species. His moth collection is held at the Natural History Museum. Died at the same place of his birth. Not to be confused with his cousin Henry Doubleday (1810-1902).

This section lists the memorials where the subject on this page is commemorated:
Henry Doubleday

The world's first business computer was built and operated by J. Lyons &amp; ...