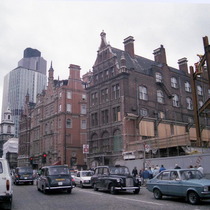 The picture shows Harwich House about to be demolished in 1987. Comparing it with this Google Streetview we think Harwich House was on the site now occupied by the rather nasty glass arcade.  Photo of another facade of the building. The name refers to the port that is served by trains from Liverpool Street Station.

The long stone insert above the war memorial, reading "Great Eastern Railway", was salvaged from the Bishopsgate facade of Harwich House. You can see the three words in the photo here, between the second and third floors.  This frieze confirms that Harwich House was built as part of the station complex.  RMWeb is a forum with some people discussing the work that went on in Harwich House in the early 60s.

This section lists the memorials where the subject on this page is commemorated:
Harwich House

Contractors who built 55 Broadway. We found some references to a company of t...

This 4-storey Georgian house was built by Charles Mayor under the supervision...

The site now covered by Essex Street and Devereux Court was once Essex House ...

In 1917 The Church Missionary Society sold its college in Upper Street and th...