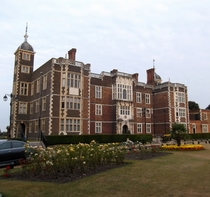 Regarded as the best-preserved Jacobean house in Greater London. It was built by the crown to house Sir Adam Newton and his royal charge, Prince Henry, the son of King James I. The interior features a great hall, chapel, state dining room, saloon and gallery. It was used as a hospital during World War I, and was bought by the Metropolitan Borough of Greenwich in 1925. The Chapel Wing was bombed during the blitz and was subsequently rebuilt. The house is now a community centre.

And what happened to Prince Henry? In 1612, aged only 18 he got typhoid and predeceased his Dad, so it was his younger brother who succeeded to the throne in 1625, as King Charles I.

This section lists the memorials where the subject on this page is commemorated:
Charlton House

The Tree Council in celebration of the Golden Jubilee of Her Majesty Queen El...

Initially this plaque looked like it was raised by a man simply concerned abo...

The picture shows Harwich House about to be demolished in 1987. Comparing it ...

The Docwra's were in the building trade. The picture source website provides...