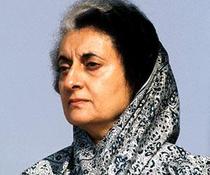 First woman prime minister of India. Born Indira Priyadarshini Nehru at Allahabad, United Provinces, India. Daughter of Jawaharlal Nehru, the first Prime Minister of India. She entered politics in 1950, becoming Prime Minister in 1966. Convicted for election malpractices in 1975, she declared a state of emergency and ruled by 'decree'. In the 1977 elections she lost her seat, but returned to power in 1980. Following her decision to remove militants by force from the Golden Temple of Amritsar, she was assassinated by two of her Sikh bodyguards at her home in New Delhi.

This section lists the memorials where the subject on this page is commemorated:
Indira Gandhi