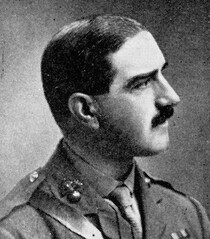 Andrew Behan has kindly provided this research: Captain Harry Robert Sauvé Pulman was born on 23 May 1867 and his birth was registered in Marylebone. He was a son of George Frederick Pulman (1826-1889) and Cordelia Pulman née Pontin (1826-1889). His father was a Printer.

He was educated at Archbishop Tenison's School, London and at Guînes', Calais, France. Aged 17 years he joined his father and brother in the business of George Pulman & Sons Ltd of which he subsequently became the Managing Director.

On 17 August 1889 he was initiated as a Freemason in the George Gardner Lodge No.2309 that held its meetings in the Village Hall, Datchet, Buckinghamshire (now Berkshire) until 1891 when they moved to the Christopher Hotel, 110 High Street, Eton, Buckinghamshire (now Berkshire). He gave his occupation as a Printer and his address as 16 Thayer Street. In 1895 the name of the Lodge was changed to Christopher Lodge No.2309.

Both his parents died in 1889 and the 1891 census shows him as a Printer, boarding at the home of his sister, Grace and her husband Henry Thornton (1856-1929) at 16 Thayer Street, Marylebone. Together with 22 other Freemasons he petitioned the United Grand Lodge of England for a new lodge to be created called the Eton Lodge. This was approved and the warrant authorising the new lodge with the number 2458 was granted on 14 December 1892 and their consecration meeting was held on 14 January 1893. Subsequent meetings were held at the Christopher Hotel, 110 High Street, Eton, Buckinghamshire (now Berkshire). He resigned from this lodge in March 1895.

On 11 November 1896 he joined the Lodge of Fidelity No.3 that met at Freemasons' Hall, Great Queen Street, London WC2, giving his occupation as a Stationer and his address as 55 Manchester Street, London, and he resigned from the Christopher Lodge No.2309 in December 1898.

On 7 February 1898 he appeared as a witness at London's Central Criminal Court, Old Bailey as a result of a John Wilson stealing a scarf pin from him on 28 January 1898. The full details.

He resigned from the Lodge of Fidelity No.3 in December 1901 and joined the Old Boys Lodge No.2500 on 18 March 1902 giving his occupation as a Secretary and his address as 24 Thayer Street. This Lodge met at the Guildhall Tavern, Gresham Street, London. Along with 17 other Freemasons he petitioned the United Grand Lodge of England for a new lodge to be created called the Royal Thames Lodge. This was approved and the warrant authorising the new lodge with the number 2966, was granted on 7 May 1903 and their consecration meeting was held on 17 June 1903. Subsequently the Lodge met at the Manor Hotel, Datchet, Buckinghamshire (now Berkshire). He resigned from this Lodge in May 1905. He joined the Royal Rose Lodge No.2565 on 14 December 1903 giving his occupation as a printer and his address as 2 Ryder Street. In October 1911 he resigned from the Old Boys Lodge No.2500 and on 9 November 1911 he re-joined the Lodge of Fidelity No.3.

On the night of the 1911 census he was visiting the family home of Theodore John Herbert Schmitz at 'Belmont', Atkins Road, Clapham Park and his occupation was recorded as a Master Printer.

On 14 November 1914 he was admitted to the Freedom of the City of London by redemption in the Worshipful Company of Stationers. He stated that he was occupying premises at 2 Ryder Street, St James's, Westminster and that his occupation was a Master Printer.

Before the First World War he had been a long serving Volunteer and Territorial army soldier with 25 years of service for which he had received a Long Service Medal and a Kings Coronation Medal. He was a member of Westminster City Council initially for Regent’s Park but, after 1912, for the Pall Mall Ward.

He was serving as Captain in the 3rd (City of London) Battalion, London Regiment (Royal Fusiliers) and entered France in January 1915. He was killed in action, aged 47 years, on 10 March 1915 when he was ordered to lead ‘A’ company of his battalion to secure a house on the corner of a village which was thought to contain twelve Germans. He led his men towards it but soon discovered a well-armed company (around 150 men) and died alongside twelve of his men. The remaining Fusiliers managed to drive the Germans out of their position and capture the house. Two weeks after his death, on the morning of the 25th March 1915, a memorial service for him was held at St James’s Church, Piccadilly, London. A fellow officer wrote home about his heroics: “In the afternoon we had three bayonet charges. In the first one, poor old Harry died like a hero. Shot in the shoulder he grabbed a rifle and continued to charge. Shot again in the forearm, he went on until a third stopped him for good. The bravest man I ever saw!”

Probate was granted on 29 September 1915 to both his widow and a James Henry Stephens, who was a chartered accountant, showed his home address as Fryth, The Common, Great Berkhampsted, Hertfordshire. His effects totalled £6,739-16s-2d. On 1 December 1915 his army effects totalling £65-13s-8d were sent to the executors of his estate. He was posthumously Mentioned in Dispatches for gallant and distinguished services in the field by Sir John French on 31 May 1915 and was posthumously awarded The 1914-1915 Star, The British War Medal 1914-1918 and The Victory Medal. After the war his body was exhumed from the grave where he had been buried near where he was killed and re-buried in Plot III, Row D, Grave 6 of the Royal Irish Rifles Graveyard, Laveintie, Pas-de-Calais, France. He is also commemorated on a tablet inside St James's Church, Piccadilly, London.

We've not fully analysed his Lodge history provided by Andrew but Pulman was a member of about six, sometimes at least two simultaneously. Perhaps this was common practice but it seems odd to us. Wonder if he had to go through the rolled-up trouser performance every time he joined a new one. Maybe he was proud of his legs.

This section lists the memorials where the subject on this page is commemorated:
Harry R. S. Pulman

The History and Antiquities of Dissenting Churches and Meeting ..., Volume 3,...

The Worshipful Company of Coachmakers and Coach Harness Makers received their...