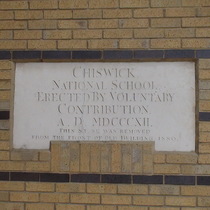 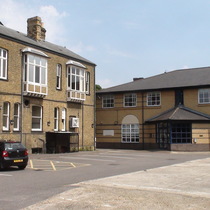 Chiswick National School - erected by voluntary contribution AD MDCCCXII. {1812}
This stone was removed from the front of old building 1880.

The text suggests that the stone came from the original 1812 building but the style does not look old enough. Despite the layout, the entire inscription has a Victorian look so we'd guess that in 1880 the 1812 building was demolished and that a plain stone was salvaged and inscribed with this text, and then built into a new building erected on the site. This has itself been demolished but the stone has been retained and re-erected on the current (1980s?) building. Other suggestions?

This section lists the subjects commemorated on the memorial on this page:
Chiswick National School

August 2019: We were informed by Ste Ríkharðsson via Facebook that the plaque...