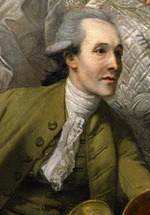 Anti-slavery campaigner. Born Durham. 1757 became Clerk in the Ordnance Office. Became involved with the anti-slavery campaign by a personal involvement with an injured slave, Jonathan Strong, at his brother's medical surgery for the poor in Mincing Lane. Once well, Strong's owner wanted him back but the Sharps resisted, and Granville's two years spent studying law and fighting on Strong's behalf were finally rewarded when Strong was freed and the free status of any slaves on arrival in England was established, to some extent, at least. Thus begun his involvement with the campaign and his association with the Clapham Sect. Died Fulham.

This section lists the memorials where the subject on this page is commemorated:
Granville Sharp