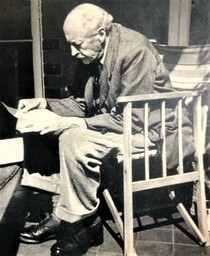 Wrote the forward to the 1942 biography of Octavia Hill by E. Moberly Bell.

The Improved Tenements Association was set up in 1900. From The London Journal: "As a concession to the societies, and to the campaign led by Sir Reginald Rowe (the chairman of the ITA), the government agreed to provide financial support for a national body representing the voluntary organisations. This rapidly produced the National Federation of Housing Societies (NFHS) in 1935, with Rowe as its first chairman. Naturally, the ITA was a founder member of the NFHS ..." and "Reginald Rowe (knighted in 1934), chairman of the ITA, was a founder member of the management committee of the Kensington Housing Trust (KHT), which was set up in 1926" and "In 1950 the ITA board converted the company to charitable status (largely for income tax reasons) and at the same time changed the name to the Rowe Housing Trust" and "Sir Reginald Rowe died in January 1945, after nearly 45 years as chairman of the ITA."

In Lilian Baylis: A Biography By Elizabeth Schafer: “Rowe was a philanthropist, poet and novelist who also wrote about rowing (he was an Oxford blue in the 1890s). He became a governor of the Vic in the early 1920s and his expertise in law and in finance were vital assets to the theatre for many years. He loved the theatre, he wrote plays, he fought many legal battles for the Vic and the Wells, but he also supported social housing projects…”

Andrew Behan has researched Sir Reginald Percy Pfeiffer Rowe. He was born on 11 April 1868 and his birth was registered in West Derby, Liverpool, Lancashire. He was the fifth son of the fourteen children of Charles Rowe (1819-1876) and Sarah Amelia Rowe née Pfeiffer (1825-1912). His father was a merchant. He was baptised on 21 May 1868 at Holy Trinity Church, Breck Road, Walton Breck, Liverpool and the family were residing in Elm House, Anfield. The 1871 census shows that the family had moved to 13a Porchester Terrace, Paddington where he was living with his parents, five of his siblings, a brother-in-law, three cousins, a butler, a cook, three housemaids, a page and three nurses. The 1881 census informs that he was a boarding scholar at Clifton College, Bristol.

On 22 October 1887 he entered Magdalen College at Oxford and obtained a Bachelor of Arts degree in 1891 having read history. He was in the crew of the Oxford University boat in the annual Oxford and Cambridge Boat Race for four years, 1889-1892, and obtained his Master of Arts degree in 1894. On 24 July 1896 he applied for membership as a Jobber in the London Stock Exchange and was admitted on 4 August 1896 and continued to seek readmission annually until 1907. During this period he gave his residence as 39 Courtfield Road, Kensington and his office address as 10 Drapers Gardens, London, E.C.

The 1901 census confirms that he was living at 39 Courtfield Road, Kensington, with his widowed mother, one brother, a butler, a cook, a housemaid and a kitchen maid, with his occupation listed as a Stock jobber at the London Stock Exchange. The 1911 census states that he was still single and living in the 18 roomed house at 39 Courtfield Road with his mother, a widowed sister-in-law, a butler, a cook, a ladies maid, a housemaid and a kitchen maid, but his occupation was now the Secretary of the New University Club at 57 St James Street, Westminster.

He was forty-six years of age when war was declared but despite this he was desperate to play a part in the war. Initially he became a committee member of The United Arts Volunteer Force that was formed within days of the outbreak of war. It was a Home Defence unit and its ranks were open ‘to all the Members of the Dramatic, Musical, Literary and Artistic Professions … including Art Students and the Staffs of Theatres, who from professional or other unavoidable reasons are at present unable to join the active or Territorial Forces, and is to afford facilities for drill and rifle practice under fully qualified Army instructors, until final instructions have been received from the War Office’.

After ‘drilling hard’ for two months he sought a commission, and was gazetted as a Captain in the 6th Battalion, The Queen's Own Royal West Kent Regiment on 3 December 1914. After the war, which he finished serving with the Military Intelligence Directorate, he published a book titled the Concise Chronicle of Events of the Great War. He was awarded the 1914-1915 Star, The British War Medal 1914-1918 and the Victory Medal.

He qualified as a barrister and both the 1925 and 1930 editions of the Post Office Directory lists not only his home address as 16 Old Square, Lincoln's Inn, London, WC2 but also as the Under Treasurer of Lincoln's Inn at New Hall, Lincoln's Inn. The London Gazette records that in the 1934 New Years Honours List he was made a Knight Bachelor for services as Chairman, since 1900, of the Improved Tenements Association and as the Founder and Honorary Treasurer of the Sadler's Wells Fund. The 1939 England and Wales Register shows him, still as a single man, residing at 19 Old Buildings, Lincolns Inn, London, WC2, giving his occupation as Retired (Late Under Treasurer of Lincolns Inn).

Probate records show that he died, aged 76 years, on 21 January 1945 at Charing Cross Hospital, Westminster, and his executors were a nephew, Felix Charles Rowe who was a Squadron Leader in the Royal Air Force Volunteer Reserve, and Charles Austin Rush who was a company secretary. His effects totalled £6,026-3s-11d. On 24 March 1949 probate was re-granted to Kenneth Newton Colville, retired Colonel H.M. Army and the effects this time totalled £1,698-5s-1d.

2020: Via Facebook Charles Rowe wrote: "Wonderful to see my great uncle Reggie Rowe remembered and commemorated. He was a great man, successfully devoting his life to leading the campaign for the upliftment of the appalling state of social housing at the time. And he was the essential driving force (with Lilian Bayliss) in the successful and lasting establishment of the Old Vic and Sadlers Wells. He wrote a popular book on rowing and another book on the urgent need for replacing the monetary and financial systems of the time which he argued were leading us to disaster (this in the 1940s). A great man indeed! I still have a memento - his seat in the Oxford boat in the 1890s."

2022: Giles Rowe (grandson of Sir Reginald's brother George) contacted us about an error in the details on this page (now corrected) and also kindly gave us this splendid photo. He believe "It’s time Sir Reginald was rehabilitated. His letter from the front show a genuine love and concern for his men."  Giles told us that rowing was in the family (an extensive case of nominative determinism?) and that his father "was very fond of his uncle Reggie, who was ‘too good looking to get married’ and died in his 70s jumping from the balcony of his rooms in Lincoln’s Inn. They were about to write his biography until they reckoned he was being blackmailed by a rent boy."

The sporting achievements, the concern for social housing, the support for the theatre: Sir Reginald accomplished so much, while apparently leading a (what was then) illegal life as a homosexual. We hope that biography does get written.

This section lists the memorials where the subject on this page is commemorated:
Sir Reginald Rowe